Well I've been busy with School holidays & Easter so have update for a couple of weeks. Have not done as much train as I'd like, but need to get back to recording what I've been up to, so I'll make a start with yesterday.

28/4 Nice commute on a fantastic day for riding 68min. Wish I'd had some extra time to do some more.
45min KB class. New idea for today's session, but need to go heavier, 28kg.

Was a challenge to do & hand lasted until the 9's on the last set & then exploded. 3 torn callous & 3 blisters. Just 26 reps of swings to many.
O.K. so I destroyed my hands in the process, but they will heal & I had a great workout & others suffered, which is all that matters.
Posted by Jeff at 8:41 PM No comments:

Busy at home at the moment as the house has gone on the market, so training time is a bit limited to get anything extra in.
11/4 Nice commute 70min
50min KB class. Rest today was taken in either Squat, push-up position or lunge position for some extra fun.
Rest was taken b/w every hand change, set etc
Around body pass 3 x 20
2A Swing 3 x 20
1A Swing 3 x 20es
Clean 3 x 20es
Jerk 3 x 20es
1 Arm/leg deadlift 3 x 20es

12/4 just the commute today as I finished early 71min

Well done Mitch for his great effort in Paris-Roubaix yesterday to come in 15th at 47sec after being in the lead group for over 160km. Check out his interview http://player.sbs.com.au/cycling#/cycling_08/interviews/interviews/playlist/Mitch-Docker-post-race-at-Roubaix/

4/4 It feels like it will be a bit of a recovery weeks after yesterdays race, as the body is a little beaten up.
Nice commute 70min. 45min KB class took it very easy with the 12kg

5/4 Easy commute 70min
KB Class 16kg
Change hands on the 1min, 4min per exercise with no rest between. Fun.
around body pass

8/4 Milly is 1 today, so Dad spent some quality time with his daughter.
Posted by Jeff at 3:36 PM No comments:

3/4 First race in 4 months & it was what we thought was a 6hr pairs race. Loved the format with you having to change riders every lap, so no doubling up & doing extras.
Woke to a nice cool morning & none of the showers that were forecast. Gavin & I headed out to Mt Macedon just after 7am, which was nice with the end of daylight savings having that extra 1hr in the morning.

We were entered in the single speed class & up against Justin & some other good teams. The course was a small bit of fire road, a bit of double track, a small bit of open single track & heaps tight single track in the bush. It was pretty flat with only 81m of climbing per lap over 7.47km. I was on some of the old Geelong course which I haven't ridden for about 9yrs. 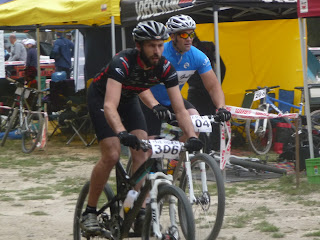 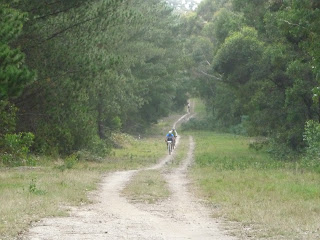 A couple of shots of Gavin on his last lap 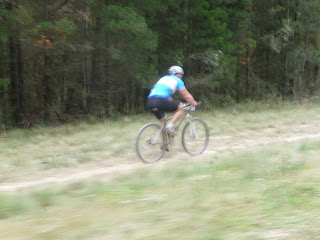 We did rock/paper/scissors for the privilege of starting, which Gavin won. So he had the privilege of starting. We didn't have the best start, as it was fast & open at the start where having gears really make a difference. Gavin came in mid pack with Justin having come through a few minutes ahead. Then for me started a blur of racing. The lap was fast & fun & with 21min + lap times it seemed that you just sat down & it was time to get up & go for your next lap. There was nothing that I didn't like about the course. Even the fire road was fun because it had big mud puddles, a hills & was short. It had 2 sets of nice switchbacks that ripped the legs apart before the end of the day. The riders were great at moving aside when they could & waiting patiently until it was safe to pass. The pit's were friendly. It was just a great days racing. As time went on we slowly got closer to the front & moved into third & then second, back to third & then all of a sudden there was less than 50mins of what we thought racing left & there was 15sec between 1st - 3rd & the race was on. Gavin did another great lap & I went out & hit the fire road still seeing the other 2. Caught Jarrod on the first climb & was slowly bringing back the other guy when we hit the single. Next thing I know here he is on the side of the track trying to fix his rear wheel that had slipped. So I smashed myself & got back just before the 6hr mark to send Gavin out for his last lap. I thought my day was done as Jarrod who was now second came in after the 6hr mark, so I headed out to the start of the single track to hassle Gavin & tell hill that Jarrod had made it in on time & Justin was chasing, which didn't make him happy. Then I told him that he hadn't. Rode back to transition for Chris to say to me "so it looks like you'll get another lap in", I go "what" & he says "single speed class isn't 6hrs, it's a pro class, so it's 6:30". I quickly roll down to where Justin is sitting icing his knee & tell him if he wants that second spot he needs to get back on his bike. Gavin comes across the finish line ready to celebrate to seeing me waiting on the bike ready to go again, with a very surprised look on his face. I didn't need to go out & do this lap, because we couldn't be beaten, but that was beside the point. I was here to do the best I could & not stop when it was convenient.
In the end we did 18laps ahead of Justin & Jarrod in second on 17laps. Gavin rode strong & didn't miss a beat, just what you want when racing.
Did I go as hard as I could Except for the last lap, my other 8 lap time were within 24seconds period. I Started cramping a bit on lap 6 & a lot on lap 7 which was my fastest lap of the day. In 3:17:20hrs of racing, I spent 1:20mins in zone 1 & 3:06:33 in zone 4.
In the end we had a fantastic day & Justin who was the fastest won the draw & walked away with a brand new set of Reba 29" forks in a redraw with Nick leaving early with nothing. I happy with the bragging rights until next time.
Thanks to Ann-Michel for bring along the yummy food & you missed out on a great race Neil. Hope you are feeling better Steve.

30/3 Takeing it easy on the commute, because the legs don't seem to want to work very well today after last nights KB session. Don't seem to know why 70min
45min KB class, just easy for me today working with a newbie
31/3 Legs still seem a bit slow for the commute 72min
PM training back at the Scout hall
Deck squats 2 x 20
Circuit 3 x's
Walking lunge 20m
Duck walk
20m Jump lunge
20m Board jumps
10kg plate push 2 x 80m, 1 x 120m
Bulgarian bag fun circuit
Swing to shoulders &  jump squat 30, 25, 20
Around body swing 20, 15, 10ew
By the time we finished my legs had started working again, which will be nice for the Duael this weeked
Posted by Jeff at 6:26 PM No comments: